The Creed IWMF, owned and operated by Comhairle nan Eilean Siar (CnES), the Local Authority for the Western Isles, manages waste generated on the island (population of approximately 22,000). Undeterred by the challenges of a limited electrical grid and logistical costs typically associated with island life, the Creed IWMF has grown steadily to include a combined heat and power plant (CHP); electric boiler and thermal store (for heat storage); a wind turbine; a hydrogen system comprised of an electrolyzer that converts water into hydrogen and oxygen, and a refuelling station; and a 254,000 gallon (960 m3) anaerobic digester (AD) plant that processes household food and garden waste.

To accept the salmon waste, the IWMF needed to install a pasteurizer to meet the United Kingdom’s Animal By-Product (ABP) regulations, which require the waste to be treated for one hour (minimum) at 70°C (158°F). “We always had an eye on how we could use fish waste but before we could invest in equipment, we needed commitments and guarantees from the fish companies about continuity of supply,” explains David Macleod, Head of Municipal Services at Comhairle nan Eilean Siar.  “We did our homework and our Plant Manager Donnie MacMillan visited installations in Scotland to find out about their experiences.  But we were still very much in a chicken and egg situation. We had the digester that is producing biogas, but we knew we wouldn’t have enough heat. A pasteurizer would enable us to meet ABP regulations. When we were able to bring in our new thermal store, together with getting the guarantee from the fish industry, we were able to go ahead.”

Pasteurization Process
A salmon processing facility on the Isle of Lewis was identified as the main source of supply for salmon waste, although deposits from other marine fish farms would also head to Creed IWMF on occasion. The IWMF receives 13,000 lbs of salmon waste per day, which is processed in a Landia ensiling tank and a pasteurizer. “We were restricted to a very tight space by regulations that demand separation of what can be housed in so-called clean and dirty areas,” says plant manager Donnie MacMillan, referring to the ABP rule designed to keep untreated “dirty” waste physically separated from “clean” treated waste  “We needed an ensiling tank, which effectively is a buffer/pretreatment tank.  With the space restrictions, a 2,650 gallon (10 m3) unit was installed, which sits just in front of the 2,100 gallon (8 m3) pasteurizer.”

The ensiling tank is equipped with an 18.5 kW stainless steel long shaft chopper pump, which recirculates and blends the salmon waste (mainly leftovers from the filleting process) into a smooth purée, before being discharged into the pasteurizer that is fitted with a side-entry propeller mixer and dry-installed chopper pump. The one-hour (minimum) process at 70°C meets ABP regulations. “It had to work,” adds MacMillan.  “We’d made a commitment to the salmon industry – and unless we could keep our promise, it’d mean a big financial burden.”

The pasteurized fish waste is integrated with household food waste and garden waste for Creed’s anaerobic digestion process. “The APHA (Animal & Plant Health Agency) take samples every quarter and we collect our own samples every month to make sure we’re free from E. coli, salmonella and pathogens,” notes MacMillan. “We’ve never failed a sample.”

Closing The Loop
Some of the electricity generated by the CHP is sent to the hydrogen system to produce hydrogen and oxygen.  This is captured, compressed and delivered to the salmon hatchery. Oxygenation is essential to aquaculture, and hydrogen is used in a small fuel cell to provide electricity to the remote site, which sometimes suffers from failures of the electrical network.  Back-ups have traditionally been in the form of aging diesel generators, with associated higher carbon dioxide emissions and delivery costs. The hydrogen system at Creed includes a refuelling station, and some of the hydrogen will soon be used to refill a dual-fuel Refuse Collection Vehicle (RCV) operating on hydrogen/diesel.

“We now get additional hours of CHP because of the pasteurizer,” says MacMillan, “and I’d say we have a healthy obsession in trying to keep the gas levels from our AD operation as consistent as possible. With the Landia units, we can adjust the nozzles at the top and the bottom to eliminate any dead spots. There is the potential to take in more salmon waste in the future.” 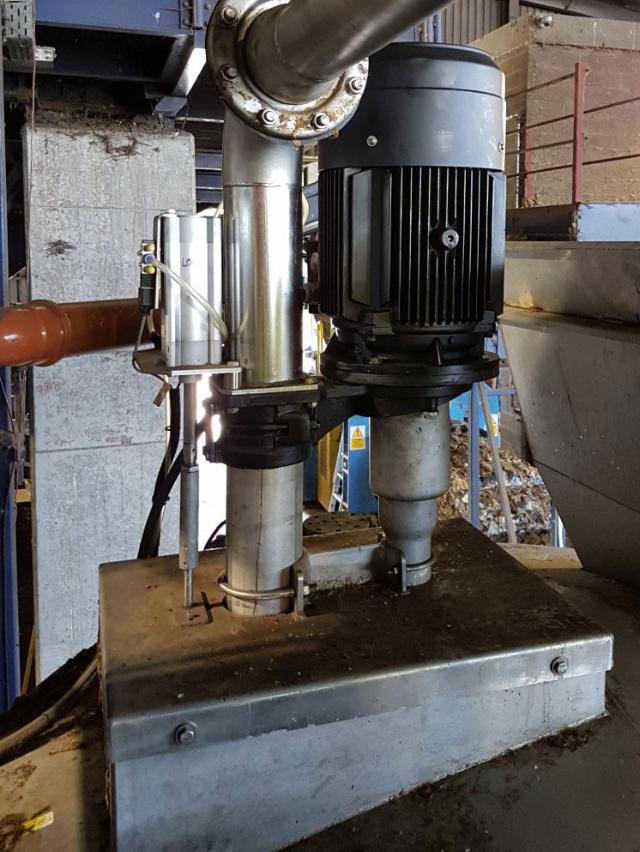