When Jersey's Department for Infrastructure and Doosan Enpure had to replace Bellozanne sewage treatment works, they seized the opportunity to engineer out longstanding problems.

Jersey – the largest of the Channel Islands – is famed for its Royal new potatoes as well as its dairy products from its iconic purebred cattle. And now, for those with an interest in exemplary engineering standards of management, research, design, efficiency, easy maintenance and high performance... its sewage treatment works.

Granted, the STW may never feature in any Channel Islands tourism brochure but, as home to one of the world’s leading international finance centres, Jersey certainly knows a thing or two about how to invest money.

When the time came to replace the sludge plant, which had been built in 1959, at the island’s STW to meet future environmental standards (and the needs of a population already in excess of 105,000), both customer and main process engineering contractor soon found that their respective drivers to meet a 2035 design horizon had plenty in common.

Three years on, the plant at Bellozanne – which is at times carbon neutral – still shines like new. This isn’t some strange coincidence or due to Jersey’s kind Gulf Stream climate.

From the outset, Jersey’s Department for Infrastructure (DfI), together with main contractor Doosan Enpure, knew that with the logistical challenges faced by the island, the criteria of efficiency, ease of maintenance and high performance was crucial, particularly for the plant’s pumps and mixing systems. Fog or high winds can soon stop goods from reaching Jersey, so Bellozanne STW had to be self-sufficient – and have back-up.

“The new plant gave us the perfect opportunity to engineer out old, unwanted problems,” says Bob King, senior engineer (waste strategy – mech & process) at the DfI. “Previously, for example, we had an ongoing nightmare with very costly maintenance for compressors, which went down even if there was just a small amount of foam in our old gas mixing system. We also suffered with ragging and problems with pipework and fittings that simply weren’t of a design.”

Weighing up Bellozanne’s drive towards a highly robust plant where downtime would be a thing of the past, Doosan Enpure was also busy sourcing kit that would meet key requirements, especially for low maintenance.

“We certainly agreed straight away that for the three new anaerobic digesters, all pipework and moving parts should be on the outside of the tank,” says Michelle Macleod, principal mechanical engineer at Doosan Enpure. “Externally-mounted equipment would also improve health and safety by eliminating the need for working at height and confined space entry.”

Together with Bellozanne STW principal engineer Gary Davies, King – who has spent 25 years working at the plant – carried out several field trips to research suitable mixers, seeking equipment that would also mix the whole tank, away from systems that provide little or no rotation.

"Eventually we visited Landia in Denmark to see for ourselves," King says. "As well as seeing the GasMix digester mixing system, the set-up and the people were impressive the moment we walked in – which gave us confidence too in the type of service and back-up that we were going to get.

"We didn’t want any breaks that would interfere with our gas production. Lowest possible price wasn’t our objective, not for one second. We were making decisions on what was most appropriate – for the long-term. A mixing system that could produce the most gas yet be the lowest on maintenance made perfect sense."

Doosan Enpure’s Macleod adds: “Landia were very helpful because we wanted everything at ground level, meaning no access platforms at the side of the tanks – which saves time and money – putting the solenoid valves that power the pneumatic actuators down to a solenoid box at ground level in an explosion-proof enclosure.

“We also wanted an isolation valve included between digesters and the actuated valve so that we wouldn’t have to decommission an entire digester if we had a problem with a valve. Operating times also came into the decision to choose Landia, rather than systems that run flat-out, so in effect it gives the operator the flexibility and confidence to fine-tune the mixing for maximum gas yields.”

At the old Bellozanne plant, lime that caused a distinctive rotten fish odour was used to enhance the treatment of sludge at a cost of £80,000 per year, but that expenditure – and the smell generated by the lime – has gone. Now there is Doosan Enpure’s established pasteurisation technology, which holds the sludge at 55°C for a minimum of four hours, prior to passing to the anaerobic digesters.

“As well as the pasteurisers, the investment in our CHP sees minimal flaring of gas,” Davies says. “It all goes to the CHP – and we can now use the excess heat to heat the sludge. The whole focus of our operation has changed, because we look at gas production every day and see how, if possible, we can tweak it to make it better.

“We might see if we can thicken more, thicken less, change feed rates – look at what is coming in, look at what is being washed away. We’ll never stop wanting to learn and improve.”

He adds: “Doosan Enpure are very good process people to work with, helping us achieve up to 500kW of electricity (and the same again in heat) – about £800 to £1,100 per day. The pasteurisers make a big positive difference in presenting the digesters with much better material. Further on in the process, we now have far less grit/silt and rag to deal with. Before we had to take a digester out of service, bring in costly tankers to remove two to three metres of grit/silt and rag – but now we’re very much heading in the right direction.”

One area that did require much more than mere fine-tuning was the continuous furring up of the new plant’s heat exchangers, which were having to be cleaned every week – going against the quest for minimal maintenance.

“Initially we blamed the exchangers, as perhaps most operators do!” King says. “We tried linking them in series, in parallel, but eventually we found the remedy by introducing an air-line. Our heat exchangers now have no trouble reaching their required temperatures and require very little in the way of cleaning. The downside to this was additional wear to the pasteuriser mixing pumps, caused by aerated sludge. This issue was addressed by upgrading to hardened impellers to improve service life.”

Bellozanne and Doosan Enpure also chose Landia pumps for three separate tanks containing digested sludge, thickened sludge (fed to the digesters via pasteurisers) and unthickened sludge that comes off the final clarifiers, which is then thickened and added to the thickened tank to maximise overall residence time. As with the Landia chopper pumps on the GasMix systems of the three digesters, none has required any spare parts since being installed three years ago.

Bellozanne is achieving high volatile solids (VS) destruction at an average of around 60 per cent.

“The pasteurisers must help, but good mixing is critical with the high temperature feed to the digesters to make sure that everything is distributed properly,” Dave Garnett, technical specialist (wastewater) at Doosan Enpure, says. “Landia’s GasMix is working very well indeed because we’re seeing plenty of energy produced by the CHP – which has already more than paid for itself – so making a big reduction in Opex.”

He adds: “It is interesting that many digesters in the industry run on 2 to 2.5 per cent solids, when with a simple retrofit to a superior mixing system, they could increase to 4 per cent and see an immediate pay off.”

Davies agrees: “From a process point of view, the good mixing we have here with the Landia equipment is very important for consistency. It has a very positive knock-on effect all the way through, including that big reduction in grit/silt, because we can see that the digesters are being mixed properly.”

Further evidence of the plant’s enviable performance comes in the shape of the sludge cake. Without lime, there was some concern initially about how consistent it would be but, according to King, the plant now produces a far better product.

“It is much more appealing to farmers, for whom we now provide technical assistance to help them with spreading compliance, testing their fields for them,” King says. “We still have more we can achieve in this area, but we’ve already come a long way since we used to have to pay farmers to take the treated sludge away!”

Davies adds: “Overall, we now have a far more complex plant – yet our investment in quality equipment is saving us money. Not everybody understands the drivers when being on an island. No point supposedly saving £1 million on Capex if it’s then going to cost you an extra £3 million in maintenance. This plant’s performance proves that we are winning the argument.”

MacLeod agrees: “I’ve never seen such a clean, tidy and well-maintained site, which is highly beneficial for the equipment, run by people who are very knowledgeable about the process and care about it.” 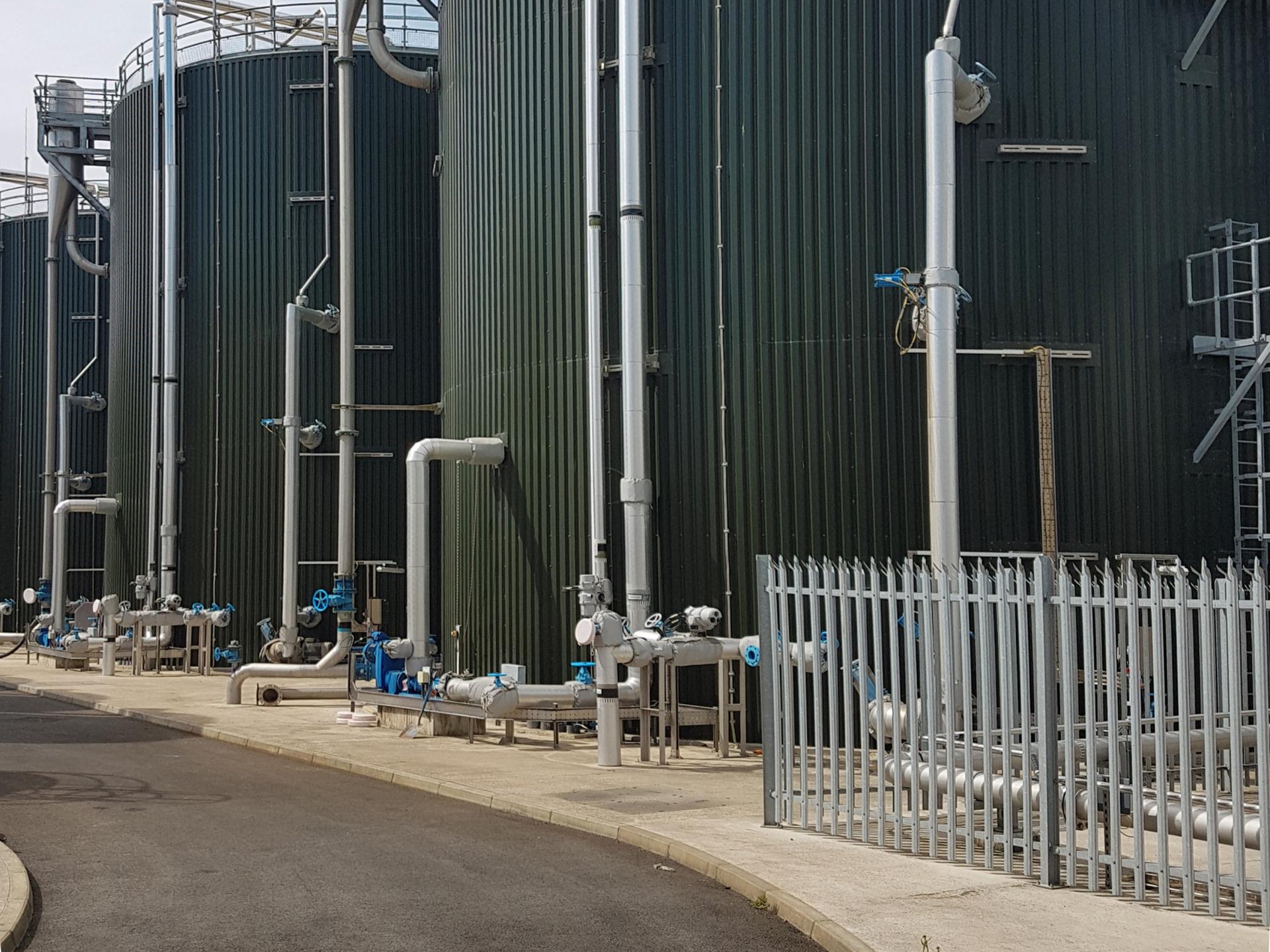