THIS PUMP SOLUTION HELPED A UTILITY CONQUER PROBLEMS WITH RAGS, DEBRIS AND GREASE

A chopper pump helps a Texas community solve a persistent problem with debris and grease buildup in a lift station.

“I used to dread coming here,” says Mitch Puckett, director of the water and sewer department in Madisonville, Texas.

He’s talking about Lift Station No. 8, and it’s no wonder he once felt as he did. Despite the installation of two pumps that were sold as able to cope with typical lift station debris, less than 12 months after they were installed, the chore of unblocking rags from those pumps became all too frequent.

Then, there was the grease: “A layer of grease more than 7 feet thick,” Puckett says. Even with all the grease traps required by code at food establishments, it seems almost every community in America has at least one lift station that its sewer department dreads. “It was unreal,” says Kevin Story, public works director for Madisonville, whose utility services include water, wastewater, street lighting and solid waste.

The city found a solution in a chopper pump fitted with a venturi nozzle. The device protects the existing pumps by macerating heavy solids into pieces, allowing them to remain in service instead of being replaced at substantial cost.

Frustrating problem
Story observes, “It was also ridiculous that so soon after the installation, the problems at our most recently built lift station meant Mitch and I had to spend so much time trying to put it right. Pulling these pumps out isn’t easy, and as any small water and sewer team will tell you, we already had more than enough to do with taking care of the city. Coming back time and time again to Lift Station No. 8 had to change.”

Story and Puckett acknowledge that the opening of a major new retailer, with 40 restrooms, just across the street was sure to create challenges for the sewer system. With grease and rags finding their way into the sewers from Madisonville’s nearly 4,500 residents, the only remedy at times was to bring in a vacuum truck.

Story had campaigned hard for the city to invest in its own vehicle since each vacuum truck service can cost up to $5,000. Chemicals can also help a beleaguered lift station, but while they provide some respite, the grease problem inevitably returns, and the annual cost is also around $5,000.

At Lift Station No. 8 (the city has a total of 12), the failure of the two duty pumps lay in the design of the impellers, which became dull and could not efficiently cut debris. The rags and trash included everything — T-shirts, towels, underwear, mopheads and assorted hygiene products, plus the almost never-ending intake of grease.

Activist director
As an experienced public works director with 27 years in the industry, Story is not often found sitting behind a desk; he’s out and about making sure things are right. The exception is when he’s at a short school. He and Puckett attain valuable qualifications through the Texas Commission on Environmental Quality and keep up to date on the right equipment.

Frustrated with the trials and tribulations of his Lift Station No. 8, Story discussed solutions with Waco-based Smith Pump. Based on previous successful installations, including the report of a complete turnaround of a challenging lift station in Llano County, Story decided to try an AeriGator chopper pump from Landia, which invented it 70 years ago.

Designed with a hardened-steel knife system that keeps large solids from entering the pump casing, the Landia chopper pump brought immediate results. The venturi nozzle enables the pump to deal with variances in the lift station scum. (For lift stations close to homes, the AeriGator unit has also been effective in reducing odors.)

Maintenance saver
“We were satisfied with the AeriGator from day one,” Story says. “It’s a complete 180-degree difference from what we had. Before, Mitch and I had to take the volute covers off the duty pumps and try to re-shim everything as best we could to get the impeller close to the wear plate. Try as we did, the volume of grease and debris would find a way of backing up and oozing up and over the lift station walls.

“My team worked hard to ensure this could only happen at a lift station or manhole, rather than at a home or business, but the grease was terrible. It’s hard to believe we had it 7 feet thick here; but now, at last, that’s a thing of the past.

“Pumps aren’t cheap. It was a worry that the float would sit on top of all the grease, leaving the duty pumps running to a possible expensive burnout. We don’t want to be using up funds on replacements when the city needs money that can be spent elsewhere on services.

“Grease damages pumps, and we don’t want to be losing out on some of our capacity because of it. Now, we look down on clear water and no longer have to dread going to this lift station. And because things are so much better, it also helps our other lift stations.”

Future designs
Story concludes, “Long after we’re gone, I want people here to see that we cared about looking after the city and that we thought about the future. I am very pleased that we solved the issues of Lift Station No. 8 for the long term.”

Last year among states, Texas had the largest growth in population in the U.S. Madisonville is not alone in having pumps that lack the horsepower of proper macerating system to handle rags. Standard-duty pump specifications often are no longer enough.

Landia recommends including constant-torque (variable-frequency drives) in future lift station designs; otherwise rags sitting at the suction of the pump upon startup cannot be properly macerated. That can cause another messy and costly pump pullout. Story will attest that it’s better to avoid such problems if possible. 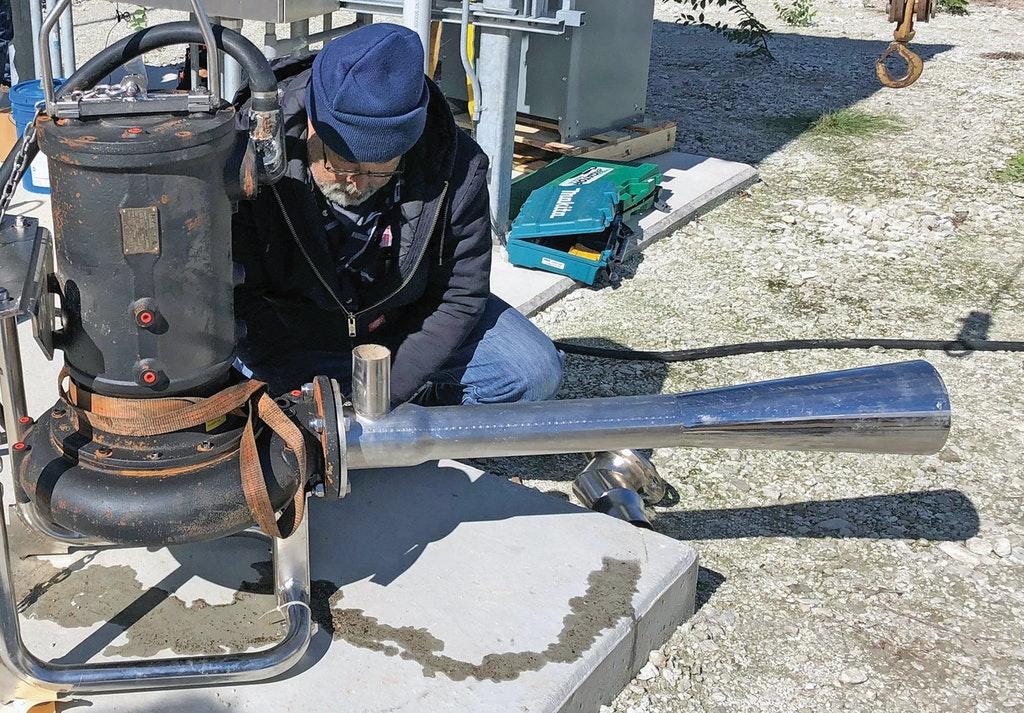