The system is designed to help boost gas production at the Chino facility’s two anaerobic digesters.

At the biogas facility that can convert up to 200,000 gallons of liquid food waste per day to renewable energy, four 15,000 gallon tanks receive macerated commercial food waste from various sources. For the past six years, each tank has been served by a stainless steel Landia chopper pump that continuously reduces particle sizes and recirculates the tanks. A chopper pump and two submersible mixers from Landia are also installed in a 140,000-gallon equalization tank, which then feeds one of two 1.2 million gallon anaerobic digesters.

When ES Engineering began managing the Chino plant, the digesters were equipped with top-mounted propeller mixers, but according to Plant Manager Alfredo Ferrin, the amount of mixing being achieved was insufficient.

"Our co-owners, a waste management company, have several large contracts with grocery stores and food producers for unwanted/expired products, so it was very important for us to maximize this large supply of feedstock with the right mixing system," Ferrin says. "It can vary from 10,000 gallons per day to as much as 200,000, but on average it is 50,000 gallons per day. It was natural, therefore, that we consulted Landia, whose equipment had been doing a very good job mixing and pumping a wide variety of slurries with quite high levels of solids."

Designed with an external chopping system that is separated from the pump casing and the impeller to prevent clogging, the Landia chopper pump can work as a standalone unit, but can also be a main component of the Landia GasMix system. All chopping is completed before the liquid enters the pump housing, which is designed to reduce wear on the pump casing, impeller and sealing system.

Using a combination of biogas and liquid recirculation for the mixing process, all Landia GasMix system mechanical components are externally mounted. This is designed to allow inspection and maintenance to be completed without having to enter or open the digester. Servicing of the Landia GasMix system can be completed while the biogas production continues uninterrupted.

Pipework is also usually mounted on the outside of the digester, but to suit ES Engineering’s requirements to have no further holes made in the wall of its insulated digesters during the retrofit, all stainless steel pipework was installed through existing manways.

The chopper pump that makes up part of the Landia GasMix draws sludge from the digester and pumps it through an aspirating venturi chamber. Biogas is then aspirated from the top of the digester, mixed with the sludge and injected into the tank. Mixing is ensured in all areas of the tank by one or more ejector type nozzles and hydraulic mixing nozzles. 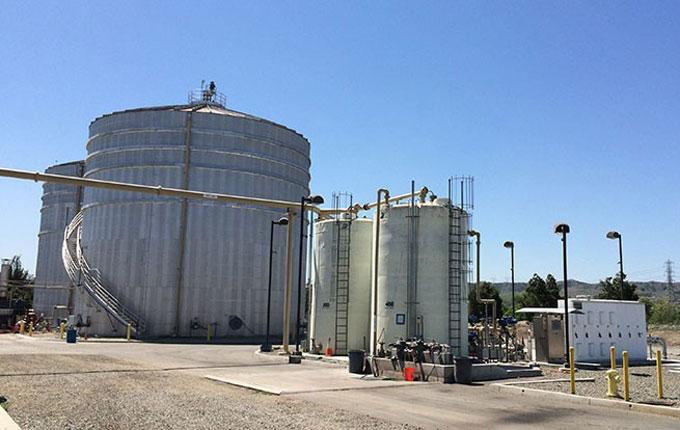